[This poem is #1 in a series dedicated to revisiting poems that were written by me as part of my participation in a collaborative and experimental poetry blog: IMUNURI.blogspot.com. Aperture was written and first published 31 December 2014.]

These that are things and not things both
They pepper the landscape
The landscape that is so and not so both
I walk amongst them
The I that is not an I after all, yet somehow is

I have special news this week to share with you all. Please join in my excitement as I announce that two works of my poetry, a visual poem and a collaborative poem, are included in One Way to Ask, an unusually delightful and innovative book of poetry and art by poet Daniel Ari and his 67 artist collaborators. (Norfolk Press, San Francisco 2016) 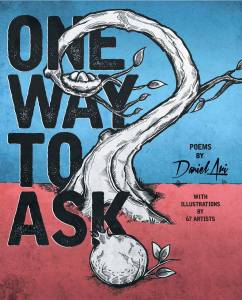 The innovation in this book is many things, but a prominent and specific one is a new form of poetry created by Daniel called the queron. What is queron, you might ask?

“Queron is a form that emerged from my poetry practice to match the way my creativity dances, curiously and deliberately, with my experience. Querons have seventeen lines grouped into three quintets and a final couplet. The rhyme scheme is ababa bcbca cdcdb dd. I prefer subtle rhyme.” ~ an excerpt on queron from the book

My collaborative poem (with Daniel Ari) is called “What Experiences” and the “artwork” that accompanies this penned collaboration is a visual poem in its own (w)right: “Where is the line drawn?” Daniel included these works as the end piece, as we delved into a unique level of collaboration, for this book, inspired by our years of writing together on a group blog of Daniel’s called IMUNURI. (I have posted/published many innovative poems on that blog, some of which I have linked to here on Contemplative Fire.)

And congrats to all the artists/illustrators included in this unique book of #poetry!

See a preview of the book or purchase a copy of this cool book for yourself, both on the Norfolk Press website.

Check out One Way to Ask on Facebook to see posts about the launch.

Or if you’d like a special author signed copy, let me know and I’ll put you in touch with Daniel.

“Reading Daniel Ari‘s poems, juxtaposed with artwork by an impressive roster of talented graphisticators, is like entering a cultural Whirlpool washer. Set to the final spin cycle. Everything comes out clean at the end, but your underwear and your socks may have switched identities.”  -Bill Griffith, creator of Zippy the Pinhead 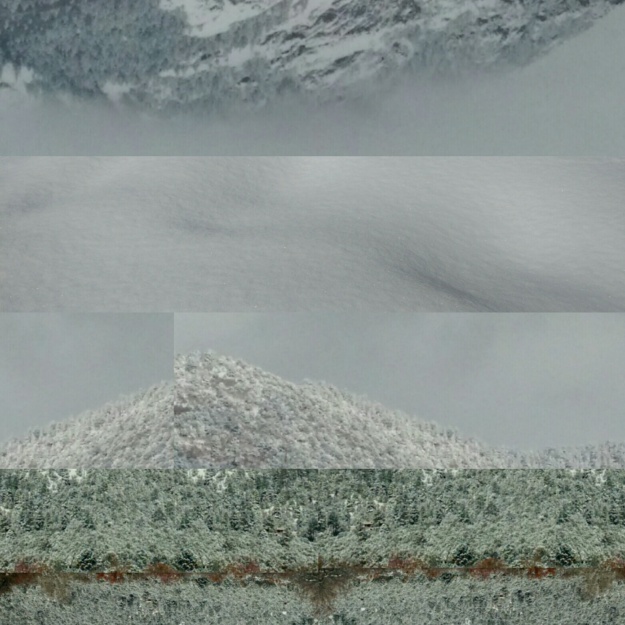 I place the paper

out where I can

see it in passing

of a spring-like rain,

in this winter of winter-

in a drafty house

to the Knowing Emptiness 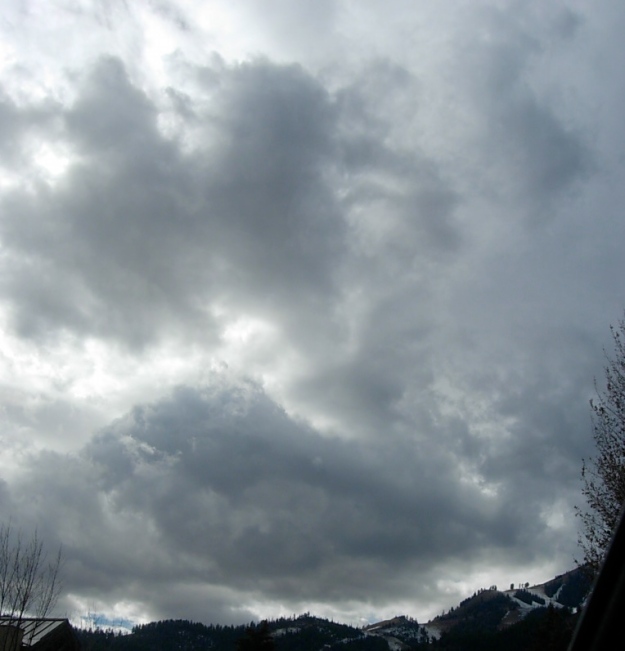 A new land was visible, as well as undeniably felt today. This land was a land of clouds, in perfect synergy with the geological, earthen land masses that appear so permanent and reliable. The cloud cover was ever changing today, reliably so. The play of light and shadow cast exponentially greater than the day or two before when I took in the simple play of afternoon light and shadow on the slopes of the Adams Gulch trail north of Ketchum (where I’ve been communing with animals for the last three weeks.)

It was as if I had arrived in a wholly new place. The clouds joining with, marrying, in a deep interplay with the curves and slopes of the mountains and hills and creek valleys everywhere around me creating a new order of scape. I was drawn to capture the shapes and the light and the feel of these ineffable contours again and again and again. Everywhere I turned, yet another land to move with, to be wafted by, lifted up while my feet remained with the ground below. 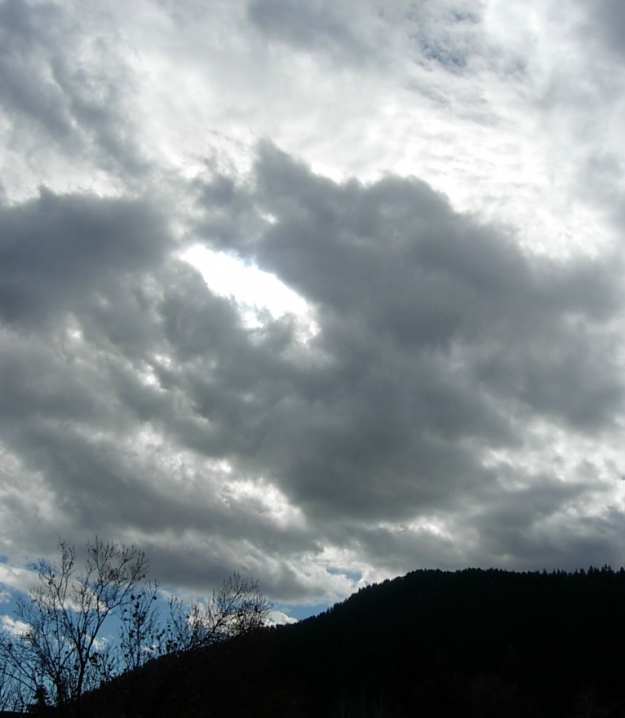 Dwelling place in the clouds

Where is it we dwell, truly? There is only one small portion of ground that our physical form rests down, touches down, meets contact with and makes real that place. All other aspects of space are perceived, even if they can be mapped, recorded, seemed to be held real ~ all these are simply a pointing to. Such is the magic of the cloud land or cloudscape, no maps are made of these.

In that way, clouds are akin to so many other changing thus not permanent things, not expected to remain the same. What is it about cloud nature that our brains so resonate with their phenomena? Are we not so much closer to cloud than steel or glass or even wood? We are so changeable by so, so many aspects and factors of life that shape us, constrict us, show us off, dissolve us, heighten and sometimes perturb us.

I will meet you here

We are at home in the sky

There no ladder climbs

Relax. Into this. And this. Relax is something that permeates into an aspect of self and being where there is no longer two. Most of my thinking seems directed by a self, a will that the self identifies as its own and yet      … and yet there is another mind or one who experiences thinking within as the very nature of space receives all things. I have been treading this ground of late, this ground of seeing and seeing and feeling into.

This ground seems pocked by hot spots, surges of energy or activity where there seems to be a discourse and nearly a battle. But the battle only appears to be a battle and is actually an incredible dance of forces merging into themselves, realizing and actualizing the potential within the not-two or between that which appears and that which is without appearance.

To have such definition on this road, the road, in actuality, of space, the misconception so easily made is to give precedence to appearances and their seeming positions and volition. This take on what simply is is often a mis-take. What can seem to be one of the self primarily, the aspect of self that is organized around identifying with, may separate out the one from the two. In effect this separating out is saying ‘I direct this and you direct that’ and in that excluding virtually all the richness of what simply is existing or co-existing, using that word to not exclude the mind’s dualistic nature here, in unconditional space.

For the self that I have so often identified with seems to be one that has a capacity to direct, to parse out, to refuse, to orient to or not, to find difference with, and therefore identify with one thing over another. I sit with the energy of this all now, the energy of it as pure space or of it existing in unconditional space/time. Something else occurs there and then (funny references really, the ‘there’ and the ‘then’) for those very references or reference points drop away or no longer serve anything of truth.

The something else is relax. Back to the first utterance, at least of this blog, and pointing to, relax is in a sense no where to go, nothing to define one thing against another. And this relax may be different from within my view or perspective from another person’s individual consciousness. And even that difference is included here. Such a unique liberation for that self that I have been identifying with so strongly. Self continues on its journey even in the relax. Self doesn’t need to identify with, it just is.

Even the way the writing is happening today seems to have relax in it. Arriving without arriving, in a way. Not making or creating a position, just seeing now as seeing is happening and allowing a writ of that. Even the words that come are fascinating as the arising, in their arising. Writ large of the Relax.

just enough to gather the energy into expression and

i discover there are images there instead of words

there are moving energies in my heart of hearts

that simply don’t want to be put into words

left to the pure beauty of the energy

this morning   it felt better to sleep   and to stay asleep

yet as the moment came to awaken

and the dormancy within    had a new voice

the body calibrated for the light   of day

while the heart in wait   exploring opening with

the shadows all around and layered through

the softness   calming nourishing inside

but tasted on the tongue   as clear medicine

takes a whole other pause   breathing into

surrendering to the weight and the lightness

of the mastery of what is held   complete   within