[Here on Contemplative Fire, Zero Point Collaborative has it’s own pages and heading and may soon have a site all it’s own. For now, it has the companions of the other aspects of my work & offerings.]

*  what is Zero Point collaborative?

Zero Point Collaborative is many things, as it is not “something” per se, it is  an opener, an activator, a container (without actually being something that contains, as in limits), it is a conscious field of awareness in which, continually or simultaneously whatever might be touched within and as this field returns to its most vital emptiness as the zero point of creation and perception both. It is a place to both begin (or resume) collaborating and to experience what serves the very heart of collaboration itself. 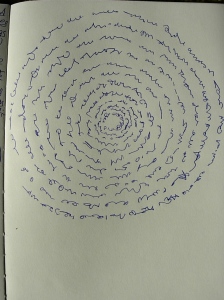 I will throw you a line

if you ask, beg, and plead

For that one you implore

is not only that which is

So I am not helping you

out of lack or distinction or

you are flawed or lost

of that which we are both

And in that way, the very line

that I throw to you

upon finding your way

will simply dissolve in hand

As that hand is found to

no longer belong to any

other than Who You Are

What We Are seamlessly

You have thrown yourself

that very line that somehow

from “The Other Not You”

And in that aggrandizing

how strange but true

you have increased your own

stead, but that very place

is none other than the All

Can you not see, but no worries

if the answer is “No” for the no

and the yes co-abide, the yes

seeming to throw its line to the no

and the no seeming to grab ahold

And in their meeting, both certainties

of self limitation dissolve in union

This Union that is no more deliberate

than exiting from the hall of mirrors

after having had our fun, our pleasure

and I will not refuse to play

in that sacred hall of mirrors

~ thank you to the Gene Keys community online, friends near and far, visible and invisible

p.s. please click through to the above linked image “hall of mirrors”… did not want to publish a photo that I don’t have permission for, so it’s waiting there for you online on its home site 🙂