however fall and free

fallowing now can not

underneath it spends en

under over over upon

sweeping past the hollyhocks

after through and to

only now to sing

first last before after ahead behind

inner outer within without interior exterior

outer inner without within exterior interior

last first after before behind ahead

you are thinking are you

are you thinking you are

listen as a sound emerges

and then drops away

where is the start

where is the end

what precedes the imperceptible

where does anything go

as it ceases to be visible

this is the appetizer

time |tīm|
noun
1 the indefinite continued progress of existence and events in the past, present, and future regarded as a whole

while other words visibly rotate within their polarity

It would be a living knowing

or expression  comes when  the

Bound less out side of time

through all truth s

open out the con straints

what Brings it to get her

takes it a part

This being human   is rather strange

in the pause   the gap   where this thing

turns upside down inside out

into itself upon itself

When time is out of the picture

timelessness not as concept

or even as replacement

What of the ways you track

do you measure according

to marks and hours and days

How can you meet yourself

outside of time   what other

when toys are left to rest

in the toy box

as the heart calls you full to

find your flowering   being   flowering

the column of the wash tub

into a deep crevice of a stream bed

my cells, my being, my heart

needing nothing with everything

as it is all that is

It is naked to not have anything that needs

returning to what is

Best description I have here 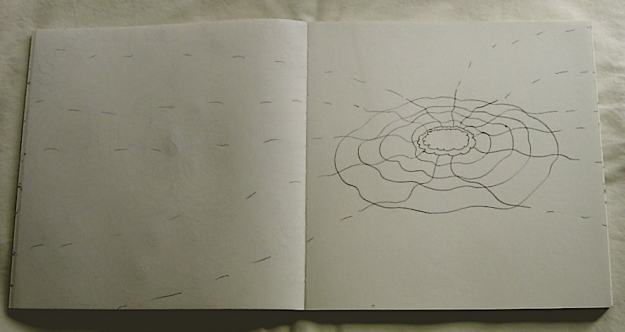 is that I’m at or aware of some kind of portal. I drew this portal today, which is what tells me it has some presence, some existence somewhere in my being, in the psyche that I resonate with energetically, something of that order.

At this opening, sometimes there is a force pulling me in, sometimes it is something pressing out or visceral pressure as if pushing against. It can change in a millisecond and that’s when it’s most felt, in that fluctuation. A whole other array of energies come into play in that second, as if there is an acute sensate awareness of what is both above and below simultaneously.

Yes, it’s as if the two distinct realities have gotten mixed and some alchemical reaction occurs in that instant. So much information floods through somatically. My brain triggers chemicals left and right, consciousness is in its feasting season, the Beloved has appeared and disappeared both, leaving a wave of breathlessness, insight, exhaustion, and longing all rolled into one.

What feels so appropriate in this drawing is that what is pointed to is the portal, not that which exists or is sensed or felt on either side of it, above or below or even through. It comes to me why some religions have approached the subject of depicting the image of the Beloved, of God and been unable to come up with anything but outright forbidding of such a practice. That which is felt here certainly feels sacred, pure beingness, that which remains unnamed.

And yet, the draw is so very real, the draw to see, to know, to behold, to understand, and to reemerge. For me, these actions are beautifully interwoven, such that one without the rest is essentially partial, not complete. The work of this place is work without working for or towards something. Things happen, but nothing can be done. Things come, the work is resting in What Is.

I had a dream on the evening of March 31st that throngs of people were moving toward me through a narrow passage and I was making my way in the opposite direction. If I were to continue on my way, I was literally having to walk on, climb over others or over their legs and shoulders, squeezing through with some kind of drive that seemed pure spirit. The intensity of this convergence has marked me in some way.

Where is the surrender? Surrender to the drive of spirit, to the nearly inhuman urge forward, to something that seems so single minded or certain that it can withstand such force? And may it be possible as I become one with it all, each element in its place is an aspect of this extraordinary confluence of energies as perceived by this consciousness.